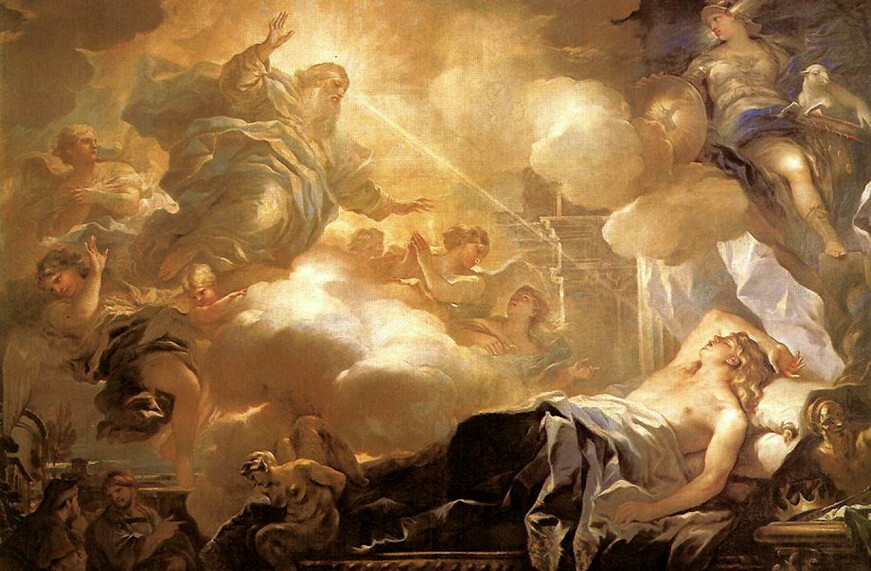 Sunday’s Lectionary reading from 1 Kings 3 allows us to overhear the pious prayer of King Solomon. His prayer? He asks God for understanding and discernment. Seems timely.
Everything Solomon does up to the moment of his prayer makes his prayer seem ironic, if not absurd. Read 1 Kings 1-3 if you don't believe me.
George R.R. Martin, who wrote the series upon which HBO's Game of Thrones was based, can barely hold a candle to 1 Kings. The Bible's more interesting Game of Thrones has a dizzying cast of characters: Barzillai the Gileadite, Shimei son of Gera, Adonijah son of Haggith, and Benaiah son of Jehoiada. Picking the wrong house, just as in Martin’s saga, is deadly business.
The Lectionary would like you to look away. It is rather embarrassed by the sordid details, the casual executions, the violation of sacred space. So it blithely skips over a few choice details, handily cuts out some offending verses, and patches together a nice passage for the lay reader on Sunday morning. I would rather we look at the text than look away.
Solomon’s accession to the throne is built on the unattested claim of his mother, spoken to the ears of the frail and morally compromised King David. Bathsheba says, so to speak, hey don’t you remember promising that my son Solomon will be king? We don't remember because the Bible never narrates Bathsheba's claim. David doesn't remember either. We are left to wonder if this is Bathsheba’s power play or Solomon’s machinations.
No matter. David is too frail and preoccupied with the company of Abishag the Shunammite to interrogate Bathsheba’s claims. He is having trouble staying warm, so his advisors think it wise to supply him with Abishag. An odd solution, that. I would have thought a blanket or two would suffice.
David at least has enough sense to cynically orchestrate the political murders of two rivals: his former hitman Joab and a man named Shimei who had uttered curses against the King years ago. David's memory only extends to grudges it would seem. Solomon knows enough about the secret code of power to hear other unuttered commands. His half brother Adonijah must be killed too. No one will get in his way.
I linger for a moment on Joab's last moments. You'll recall that Joab was David's enforcer in the Uriah tale. He had a long body count. Now he finds the tables turned. Knowing he is being hunted, Joab retreats to the Sanctuary where the Ark is kept, gripping the horns of the altar for dear life. His hands will soon be prized off by Benaiah, only the latest hit man to find service in the King's court.
It is a telling narrative detail that Joab's only resort to religious piety is a cynical use of a sacred space to save his own life. He cannot call upon a God he never served. The God of Israel is the kind of God who would answer such a call, but this is a tragedy, remember? Joab's thinking seems to be: surely you wouldn't kill in this space? He should have known better. Benaiah kills Joab. Solomon keeps his hands clean, and with that, all rivals to the throne are erased.
Where God might find entry to such a Machiavellian tale is unclear. But God does make an appearance, one that is loaded with incredible generosity. Appearing in a dream to Solomon, God says "Ask what I should give you." Would that we mere mortals get such an opportunity. No doubt we'd squander it like Solomon.
What Solomon asks for is noble enough: a discerning heart to tell the difference between good and evil. That he does so immediately after an orgy of violence is a tip-off that irony is the dominant register for interpretation. He will be King, and all who oppose him will die, and we must accept that God appears to him in dreams. And that is that.
To the victor go the spoils, as the saying goes. I wonder if Solomon thought Yahweh was simply another spoil of battle. A local deity he could claim as his own. The King will not be denied, and the King controls the narrative, and the King employs the historians who give the official account.
And yet, a close reading allows us to see beyond the pious and facile claims about Solomon's greatness. What is there in the tale of Solomon that confirms the claim made in 1 Kings 3:3 that "Solomon loved the LORD, walking in the statutes of his father David"? Was it the murder of Adonijah, his half brother? The murder of Joab in the tent of meeting? The murder of Barzillai on a flimsy pretext? The alleged brilliance of his judicial decisions, the sole case study of which is his preposterous demand that a baby be cut in half in order to reveal which of two prostitutes was its mother?
The tragic denouement to the King's tale comes in chapter 11. It is a Solomonic verse, for it splits the narrative and our understanding in two. We are given a litany of crimes. And then this striking judgment: his heart was not true to the LORD his God.
After a close reading, we can now say: we knew that all along.
Daniel Headrick, Associate Pastor
[image attribution: By Luca Giordano - Web Gallery of Art:   Image  Info about artwork, Public Domain, https://commons.wikimedia.org/w/index.php?curid=15883941]
Posted by Rev. Daniel Headrick with
7/30/21

Loving Your Neighbor Means Get Vaccinated Maybe I’m preaching to the choir here, but since our choir has been disbanded for over a year I’ve lost touch.  So, if there’s one person who needs to hear this, here goes: get vaccinated.

There is a mystifying thing going on in this country.  We have a surplus of a lifesaving drug which has been proven to greatly reduce your risk of dying on a ventilator after being infected with a respiratory illness.  And yet, millions of people refuse to get it because of either something called “personal freedom” or conspiracy theories they’ve read online, or what they heard happened to their cousin.

Let me be clear.  This is a moral issue.  You should get vaccinated.  Doing so protects not just your own body, but the body of your neighbor and your neighbor’s kid.  To the extent my voice matters in your hearing and reading, I implore you to listen to it.  But don’t just listen to me, listen to the scientists and doctors who actually know what they’re talking about.  They are saying get vaccinated.

The difference is: I’m telling you it’s more than just common sense.  It’s required by our faithfulness to Jesus’ command to love our neighbor.

To test your moral thinking on this issue, ask yourself: is my objection to taking the vaccine grounded in my faithfulness to God, and is such faithfulness part of the shared values and thinking of my community of faith?  Or, is my thinking derived from some other source which is unrelated to my moral and religious center?

Perhaps we need a theology of public health or a theology of vaccinations.  I have an idea, let’s use Matthew 22:37-40 where Jesus answers the lawyer’s question about the greatest commandment.  Everything “hangs” on this, Jesus said.  Put differently, personal freedom ain’t on the list.

I love you.  And you matter.  That’s why I’m willing to tell you the truth. 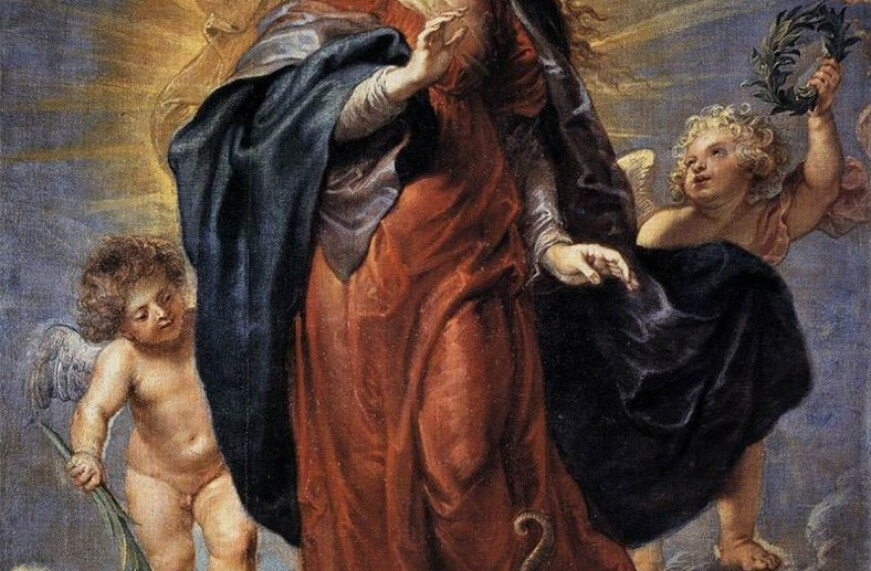 In studying the Genesis passage from the alternate Lectionary reading with our Wednesday morning Bible study group via Zoom (join us sometime!), I came across this fascinating little diversion: the notion of the protoevangelium, or the "First Gospel." Early Christian readers of Genesis 3:15 seized upon the symbolism and connections to Christ's cosmic victory over the powers of darkness and termed this verse the first Gospel.
Freshly ashamed and aware of their naked bodies, Adam and Eve are pursued by God in the Garden of Eden. Adam blames Eve, Eve blames the serpent, and then God curses the serpent in verse 15: "I will put enmity between you and the woman, and between your offspring and hers; he will strike your head, and you will strike his heel.”
Some early Church fathers read this and said aha! the serpent is the Devil, the woman is the Virgin Mary, and the 'he'  who will strike the serpent's head is Christ.  You can find that line of thinking in Bishop Irenaeus of Lyon Against Heresies, Book IV, Chapter 40:

And the Lord summed up in Himself this enmity, when He was made man from a woman, and trod upon his [the serpent’s] head, as I have pointed out in the preceding book.

There is a fascinating tradition in Western Christian art of depicting the Virgin Mary trampling the head of a serpent which encapsulates this theology.  Artists like Ruben, Tieopolo, and Caravaggio all treated the theme in different ways.  The painting by Rubens entitled Immaculate Conception is below. 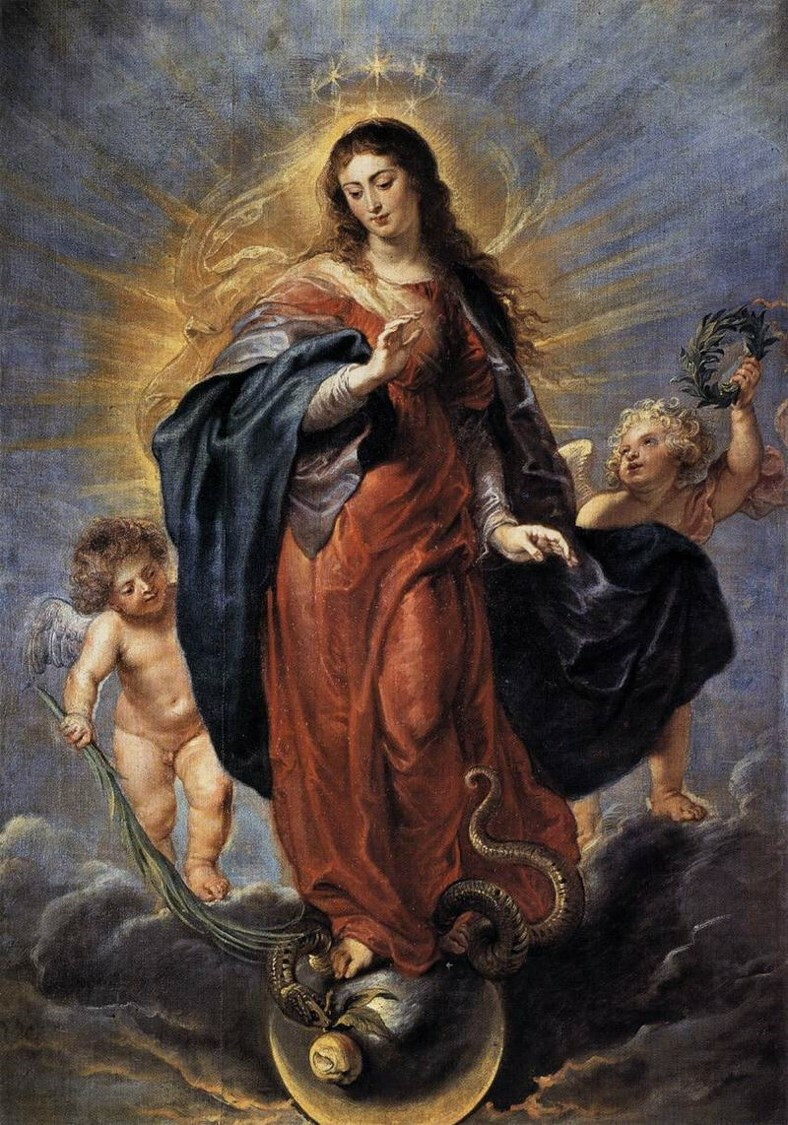