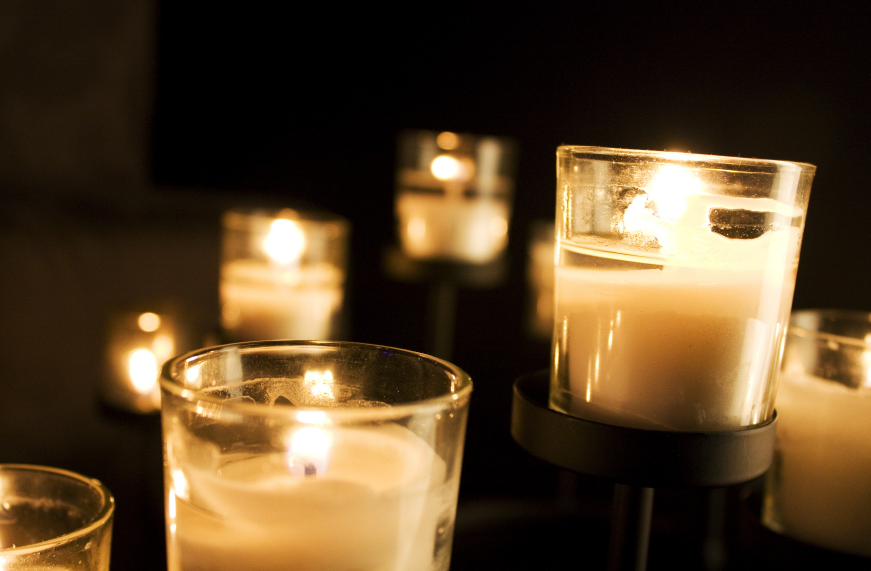 Fear and despair are familiar emotions for many. You may have felt these emotions at higher levels in the last week. I write to offer encouragement and hope.

Several Northside Drivers gathered at the Temple on Tuesday for an interfaith prayer vigil to remember the dead in the Pittsburgh shootings. The killer violated a sacred space. He walked right into a synagogue, a house of prayer, and killed eleven people. He shouted "All Jews must die!"

One thing I learned from hearing Rabbi Peter Berg who spoke at our vigil was that the motivation for the killer's rage was Jewish support for migrants. Apparently the shooter's social media trail left clues about that. Rabbi Berg said that anti-Semitism used to be about the myth of deicide (where Christians would attack Jews for killing Christ), and then it morphed into the myth of international banking and media control. But with this mass shooting, Rabbi Berg said that the motivation was an attack on the entire Jewish ethical system which supports the alien, the foreigner, the "stranger" among us.

That stopped me in my tracks. What is it about showing compassion for the stranger that is so threatening to people? Is it the fear that they will be displaced? That they will lose their place in society? As one participant at our faith leader table said this Tuesday, the causes are multi-factorial, but ultimately...unknowable. In other words, none of us can fully comprehend how a person can be so driven by anger and madness to do such a heinous act.

At times like this, I shake my head and say "the world is broken."

Christian faith teaches us to never be hopeless. We can take great hope in the words of 1 Peter 1:3...

By his great mercy he has given us a new birth into a living hope through the resurrection of Jesus Christ from the dead.

But we do make a difference. We have a living hope. It is always being challenged for renewal and increased vibrancy. And it always grows in compassionate contact with our neighbor.

Let's keep connecting with each other about how we renew our sources of hope.

Each interfaith relationship I nourish brings me hope that the world does not have to be the way we often experience it to be. Each time I share communion and fellowship with you, I am nourished by deep faith. My Christian faith, when fed by the living hope through the resurrection of Jesus Christ leads me towards loving relationship, not away from it. And that is a hope worth living for.

Attention Must Be Paid 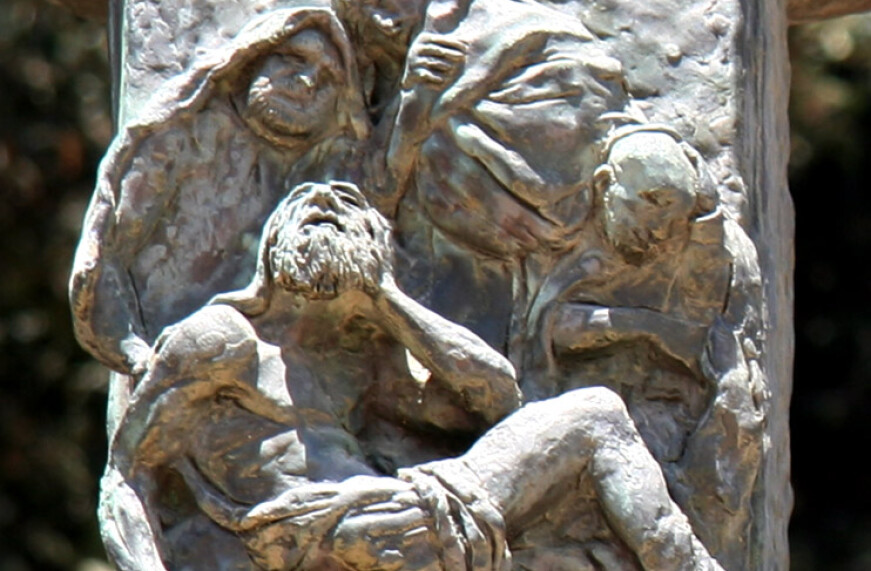 Image attribution: By Tamar HaYardeni - Own work by the original uploader, Attribution, https://commons.wikimedia.org/w/index.php?curid=62597278

In the play Death of a Salesman, the main character Willy Loman is having an existential crisis. He is struggling with his own purpose and self-identity. Faced with the prospect of losing his job and the respect of his two sons, he is struggling to stay afloat. To my ear, one of the most powerful parts of the play is when Willy’s wife Linda defends him to their son. Linda passionately says,

Willy Loman never made a lot of money. His name was never in the paper. He’s not the finest character that ever lived. But he’s a human being, and a terrible thing is happening to him. So attention must be paid. He’s not to be allowed to fall into his grave like an old dog. Attention, attention must be finally paid to such a person.

Attention must be paid. That is the quintessential human request, is it not, of the divine encounter? The story of Job, which the Lectionary treats sporadically this time of year, is about a man who experiences great suffering and pain. He is left to ponder why. He has to endure his so-called friends who unleash a barrage of bad theology and platitudes. They are often maligned for the unhelpfulness of their words. And it is true that a poorly timed word can be more destructive than silent “being with.”

But they do at least pay attention to this man in his profound suffering. One wonders what happens to Job’s wife in this…if any attention was paid to her?

And then in chapter 38, God shows up “out of the whirlwind.” For years I heard these words as those of a bully. Job is shouted down. “Where were you?” God asks in a series of rhetorical questions meant to remind Job that God is God, and Job is Job.

But I can’t help but wonder if there is another way to hear these words from God, prompted by Job's speech.  And it is in the more robust sense that the Jews call chutzpah. It is in the boldness of Abraham bargaining for the lives of Sodom. Those who dare to believe that the prospect of suffering is a proper subject for vigorous interrogation of God may very well receive an answer out of the whirlwind. Or they might receive a “thick silence” as 1 Kings 19 metaphorically describes.

But the God of the Bible who descends from the whirlwind to engage the human existential dilemma is one who is not aloof and distant. God is not the Deist’s clockmaker, setting the Earth into motion, then retiring into eternal self-reflection while the Earth burns below. No, this God is one who recognizes that humans in their finitude who cry out to God are created in God’s own image, and therefore the objects of love and creative fidelity.

God’s loving pursuit of human redemption emerges as attention being paid to the human being—as Linda Loman said—“attention must be finally paid to such a person.” It may not be the experience we’d crafted in our minds when we imagined God would emerge out of the whirlwind. But why should it be? After all, God is God and we are not.

Receiving the Kingdom as a Child 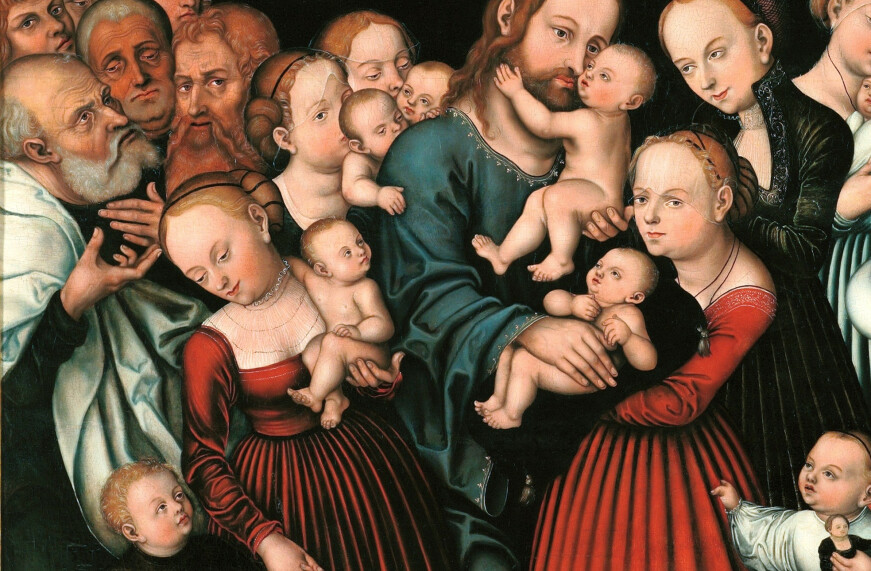 The Gospel reading for Sunday, October 7, 2018 is a longer passage in Mark about divorce and children.  In a prior passage, Jesus taught his disciples that the antidote to their narcissism was to be welcoming to the lowest members of society.  However, in this passage, Jesus shifts his focus to the actual behavior and characteristics of children which are worthy of emulation in kingdom seeking disciples.

People were bringing little children to him in order that he might touch them; and the disciples spoke sternly to them.  But when Jesus saw this, he was indignant and said to them, “Let the little children come to me; do not stop them; for it is to such as these that the kingdom of God belongs.  Truly I tell you, whoever does not receive the kingdom of God as a little child will never enter it.”  And he took them up in his arms, laid his hands on them, and blessed them. Mark 10:13–16

We shouldn't be surprised that the disciples have so easily forgotten the lesson of Mark 9:30-37 about welcoming the child.  They are portrayed as rather stubborn and difficult of learning throughout this Gospel especially.

I think that our common sense interpretation of this passage is probably not far off from what Jesus meant.  By that, I mean we all associate certain qualities with children that can illuminate this text.  A child is born into this world:

These are physical and psychological realities which you could nuance with your understanding of nature vs. nurture and special exceptions.  Put into theological terms, to be a like a child then is to be entirely reliant on God's grace for entry into the kingdom.  The Bible uses different metaphors to capture the reality of becoming a child of God.  Paul speaks of adoption (a metaphor dear to my heart) in Galatians 4:4-5.   Paul also speaks of inheritance and becoming part of the family of God in Romans chapters 4 and 8.

The power of thinking of human beings before God as little children is that it captures an essential element of biblical theology: that we are all born into this world in fundamental equality before God.  All must receive grace in order to enter the kingdom.  No person merits grace.  No person earns his or her way in.

I believe Jesus was continuing his lesson from Mark 9:30-37 when the disciples were arguing about who would be the greatest.  The reason this has to be repeated over and over again is that the disciples (and of course, we!) don't get it.  In just a few verses, James and John will come to Jesus and ask to sit at his left and right hand "in your glory."   They still didn't get it.  The kingdom of God is not about seeking our own glory.  It begins with a recognition that our own spiritual poverty (apart from God) won't do us any good.  This is why Jesus says in his very first beatitude "Blessed are the poor in spirit."

So, to be "as a little child" means we cannot rely on our own accomplishments and "greatness."  Instead, we must be solely reliant upon the will and grace of God.  There is so much more to the story, of course.  The rest of the story is nothing short of our whole lives as disciples.

But here Jesus is talking about just entering the Kingdom.  And in order to "enter" you must be reliant on God's grace alone.