Lord Who Throughout These Forty Days... 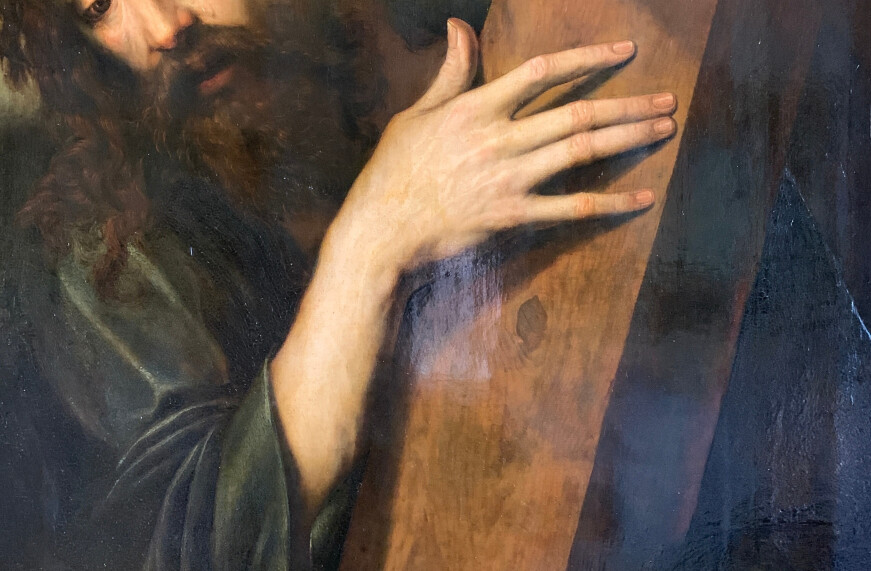 Amidst the hurried distractions of our lives comes the regular liturgical heartbeat of this time of year known as Lent.  And yes, we peculiar Baptists do observe Lent.  We find that the tried and true rhythms of Christian liturgical worship carry a deep resonance.

Lent comes from a word meaning "lengthen" and during these days our souls will lengthen and hopefully become more pliable, open, and receptive of the Holy Spirit.  May God lengthen our spiritual "attention spans" during this Lent.

Here at NDBC, in place of the Gloria Patri, we'll sing Lord Who Throughout These Forty Days by Claudia Frances Hernaman (1873).

The opening stanza of this hymn contains this beautiful lyric:

Lord, who throughout these forty days
For us didst fast and pray,
Teach us with thee to mourn our sins
And close by thee to stay.

Just as Christ experienced the harrowing of his soul for forty days and nights in the wilderness, so too are Christ's followers called to fast, repent, and reflect.   Listen as you sing or read these words for some ancient cadences and peculiar vocabulary.

The hymn uses words like "sin" and "mourn"...and later it asks Jesus "to teach us, gracious Lord, to die to self."  There's not much talk in popular culture about "dying to self."    The Church uses ancient words which have an increasingly difficult time finding purchase in modern parlance.   But these words are both richer and more capable of leading to spiritual growth than the language of pop psychology or something purloined from the self-help aisle.

Imagine going to the bookstore and asking "where is the dying to self aisle?"  That might occasion a puzzled look.  Christians understand that the resources we have independent of God are so inadequate and scarce, that we cannot take the first step without the enabling power of God's grace.  Lent without grace is like the law without mercy: nobody wants to be subject to such a regime.  So, may grace come.

The ashes we'll receive on our foreheads are a sign of both our belonging to God and our status as sinful creation.  We are not perfect.  We have sinned.  But under the sign of the Cross we continue our journey, seeking repentance, renewal, transformation, and finally: Resurrection.  Lent begins with ashes, signalling this great truth of all human existence that we all will die.  Each one of us.   And yet death will not have the final word.  We are an Easter people, so death can never have the final word.

Remember that you are dust 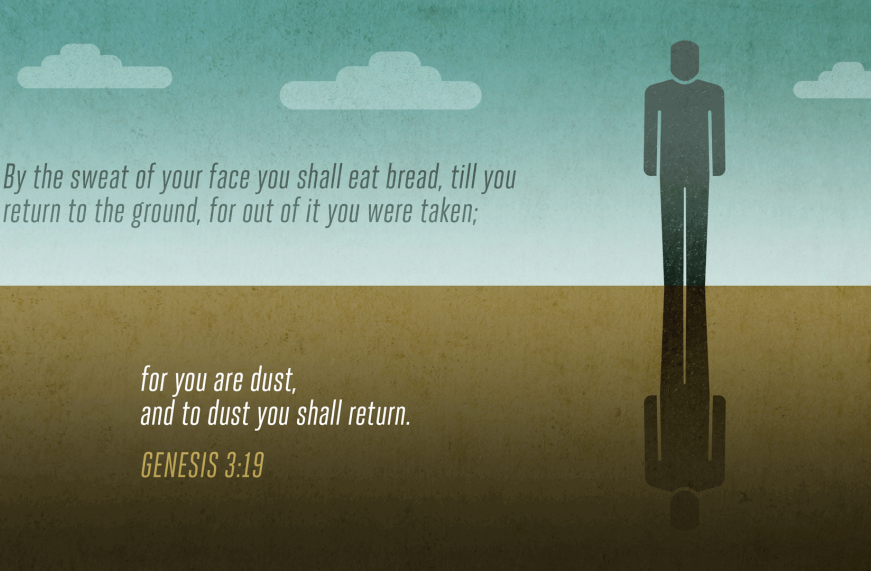 Remember, you are dust.  I remember the first time I attended an Ash Wednesday service in a Baptist church.  A minister traced the cruciform image on my forehead and whispered these words "Remember that you are dust and to dust you shall return."  These are somber words.   But they are ancient words, with more than a trace of biblical allusion.  In the garden, the first humans in the poeticized telling of Genesis disobey the divine command to not eat of the tree of the knowledge of good and evil.  God responds to this act of infidelity by a rather extended monologue, detailing the pain of childbirth and the toil of farming land for food.  Out of the blissful naivete of Adam's and Eve's life (how could they know the import of the divine command without moral knowledge?) they are cast into the roles of mere mortals.  God pronounces this odd benediction:

"By the sweat of your face
you shall eat bread
until you return to the ground,
for out of it you were taken;
you are dust,
and to dust you shall return.” (Genesis 3:19)

Ancient words.  Words uttered millions of times in liturgical hope.  Words that embrace life and death under the graceful hand of the Creator.  Scientific cosmology tells us that humans share the same building blocks of life with the galaxy .  Perhaps the first life emerged from a bit of space dust, the ashen remnants of a dead star.  Literally, we are all stardust.  In Genesis 2:7 God "formed man from the dust of the ground, and breathed into his nostrils the breath of life; and the man became a living being."  Out of dirt God created the adam, and breathed God's spirit into the human.  One day, the first adam would be buried in the ground.  We share that destiny, from cradle to grave.

A great chain of being, stretching back, linking all humans who have ever lived.  And etched on our foreheads is the sign of the cross.  Before that first Easter Sunday, the cross was always and only a sign of death, destruction, and despair.  There was not a hint of redemption in its bloody beams.  But we know how the story ends.  Or rather, how it begins.  It begins not with the death of a failed messiah, but with the resurrection of our Lord.  You can't have cross without resurrection.

So when you take the sign of the cross on Ash Wednesday, know that it is a mixture of grief and hope, sin and redemption, death and resurrection which is etched on your forehead.  A friend once told me during a time of profound moral crisis that "grace always trumps the law."  Take the ashes as a sign of God's unending grace.  Take the ashes as the free offer of mercy, the assurance of pardon, through Christ our Lord.

The Liturgy of the Mall

What practices and rituals shape who you are as a human being?  Answering that truthfully requires time and the capacity for self-examination.  To prepare for the season of Lent, I propose that we do just that.

I just finished an interesting book by Christian philosopher James K.A. Smith called Desiring the Kingdom. The chief claim of the book is that Christian worship should function as a counter-liturgy to the other liturgies of formation which are active in our lives. There is, by way of example, the liturgy of the mall. The mall, with its overstimulated images of alleged human perfection, tells us that we are broken.  Our out of date shoes and clothes mark us as outcasts in a consumer economy.  We can literally purchase our way into community.  We are never prompted to ask of the mall "Where does all this stuff come from?" (101)  And therefore, "[t]he mall's liturgy fosters habits and practices that are unjust." (101).

The book, written in 2009, is already outdated in an Amazon driven shopping economy.  I'd like to see it rewritten with an eye to the liturgy of the smartphone.   No doubt, the conclusions would be the same: we are always being formed in powerful ways by the things we spend time with.

But hold on, you say...I thought liturgy meant religious ritual or the music and words we sing and say on Sunday morning.  Smith defines liturgies as "rituals of ultimate concern: rituals that are formative for identity, that inculcate particular visions of the good life, and do so in a way that means to trump other ritual formations" (86).

Understood in this way, there can be a liturgy of the mall, a liturgy of Christian nationalism, etc.  Quoting theologian Stanley Hauerwas on Texas football is emblematic of the book's claims: "As is well known...Friday night high school football is the most significant liturgical event in Texas" (106).   I remember as a young student going to high school basketball and football games.  Everybody was expected to stand and place their hands over their hearts and remove their hats.  If you have trouble conceiving of these ritual acts as liturgical acts, think about what would happen if you refused to participate, or as Smith puts it: "Just try to remain seated at the next playing of the national anthem" (107).

Actually, we wouldn't have to think hard about what would happen.  Our news has been suffused with examples of this kind of liturgical defiance.  You can quickly determine which liturgies have the most powerful hold over practices and imaginations by tracking the degree to which it is considered a sacrilege of the national religion of patriotism to kneel during the anthem.   Smith claims that most Christians fail to see any tension between the Gospel of Jesus Christ and the Gospel of Christian nationalism.  Why? "[B]ecause, subtly and unwittingly, the liturgies of American nationalism have so significantly shaped our imagination that they have, in many ways, trumped other liturgies" (107).

Imagine an uproar about whether the Doxology was sung with gender inclusive language.   That might stir up some drama in a committee meeting, but it's hard to imagine that in the world outside the church, anybody would really care.  That people care so deeply about the ritual of the national anthem is a sign of how powerfully formative the liturgy of American nationalism is.  This is just by way of example, and no doubt you could identify other formative liturgies.

All of this talk of what forms us led me inexorably to self-examination.  Especially insightful was this exercise which Smith calls "A Practices Audit."  He asks the reader to pose these questions:

Take some time and try to answer these questions.  What kind of liturgies shape who you are?  Lent is merely a week and a half away.  Now is a good time to begin the journey of self-examination and communion that Christ calls us to begin.